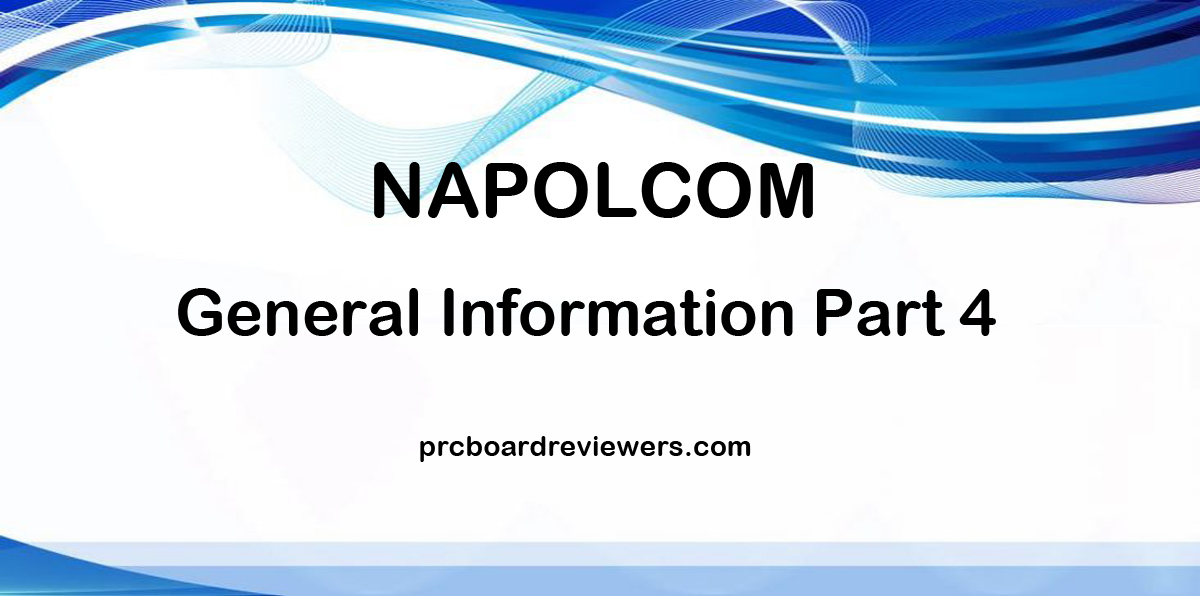 1. All government agencies, office or corporation shall reserve at least 1% of all position for whom?
A. Senior Citizen
B. Blind people
C. Youth
D. Persons with Disability
E. Veterans

2. Pope John Paul, in his 1981 visit in the country declined the offer to stay in the  ____________ . because  he decided it was way too pretentious and flamboyant.
A. Manila Hotel
B. Malacanang Palace
C. Coconut Palace
D. Cultural Center of the Philippines
E. Palacio del Gobernador

6. What was the first church that the Spanish built on the island of Luzon in 157.
A. Santa Cruz Church
B. Immaculate Concepcion of San Agustin
C. Quiapo Church
D. Mother of Perpetual Help in Baclaran
E. Sto. Nino Church in Tondo

7. The minor Basilica and Metropolitian Cathedral of the Immaculate Conception is a roman catholic basilica located in Manila, Philippines an d serves as the see of the Archbishop of Manila. What is it informally known?
A. Manila Cathedral
B. Quiapo Church
C. Church of Mt. Carmel
D. Binondo Church
E. Malate Church

9. A virus that is spread by daytime-active mosquitos and its name comes from a forest in Uganda where the virus was first isolated in 1947. What  is this virus which is related to the dengue and yellow fever?
A. SARS
B. Zika virus
C. Mers
D. Ebola virus
E. Dengue virus

11.What is the imposition of the highest-ranking military officer as the military governor r as the head of the government or as the head of the Government, thus removing all power from the previous executive, legislative and judicial branches of government?
A. Military Troika
B. Federalism
C. Communism
D. Socialism
E. Martial Law

12. She is one of the Philippines’ national artist and acknowledged Queen of Kundiman.
A. Pilita Corrales
B. Honorata ‘atang ‘ dela Rama
C. Imelda Papin
D. Dulce
E. Didith Reyes

13.  It was designed by Juan M. Arellano the genius behind other Manila architectures gems like the Central Post Office and the Legislative building. This theater is a great example of an Art Deco Building and was inauguratedon December 10, 1931.
A. Cultural Center of the Philippines
B. Folk Arts Theater
C. Manila Metropolitan Theater
D. Araneta Coliseum
E. Manila Grand Opera House

15. It is the oldest and historic core of Manila, also called the walled City  and at th time of the Spanish Colonial Period was  synonymous to the city of manila itself. It was the seat of government when the Philippines was a component realm of the Spanish Empire.
A. Intramuros
B. Fort Santiago
C. Bagumbayan
D. Roxas Boulevard
E. Binondo

16. In November 2013, the court ruled that the fund from what government revenue should be reserved for financing “energy resources development and exploitation activities?
A. NAWASA
B. NAIA
C. Meralco
D. Manila Water
E. Malampaya Natural Gas Facility

17. A remedy for the protection of constitutional rights which can be invoked by any person who believes that any of his rights, implicitly or explicitly protected by the constitution is being violated.
A. Writ of Amparo
B. Writ of data
C. Writ of habeas corpus
D. Writ of kalikasan
E. Writ of mandamus

18. This is a state-run, social insurance program in the country to workers in the private sector, wage earners s well as self-employed persons.
A. GSIS
B. PAG-IBIG
C.SSS
D. Philhealth
E. NSO

19. A historical urban park in the Philippines, ones of the largest urban parks in Asia which is located along Roxas Boulevard and adjacent to the old walled city of Intramuros.
A. Plaza Goiti
B. Rizal Park
C. Plaza Miranda
D. Malate Park
E. Baywalk